Similar to this question, Chrome is showing the connection cryptography as obsolete. Opera, IE and Firefox seem perfectly fine with the connection. 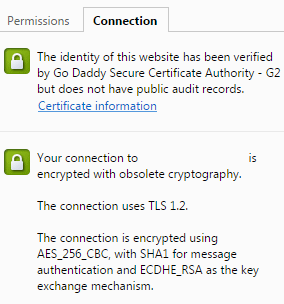 My guess would be the message authentication is using SHA1, but when I view the certificate information, the only mention of SHA1 is the Thumbprint. This appears normal for Windows systems. What exactly is 'message authentication' referring to and what do I need to change server-side to fix this?

As described in this answer and in this commit to chrome only AEAD ciphers are considered state of the art security. It looks like that your server does not use the cipher preference of the client but instead has their own preference which looks like this:

This means you prefer ECDHE-RSA-AES256-SHA to ECDHE-RSA-AES128-GCM-SHA256 and thus the chosen cipher based on Chromes offer will be AES256-SHA256, because it look like Chrome does not support the SHA384 ciphers. To fix it you might change the order and put the GCM ciphers on top of the preference list.

It is actually the usage of a SHA-1-signed certificate. Everybody (including Google and Mozilla) is phasing them out.

Edit: Open that address in a new tab and take a look at the browser's console. There should be a link that will give a better explanation about what the issue really is.

The website is using Sha1 certificates to provide security so the new chrome browser is showing it as week algorithm because most of the organizations already migrated to SHA2 certificates. it's just a warning it does not mean that its a non-secured connection.

Not the answer you're looking for? Browse other questions tagged encryption tls cryptography chrome or ask your own question.