If the public key can't be used for decrypting something encrypted by the private key, then how do digital signatures work?

I'm learning asymmetric encryption in the use case of ssl/tls protocol.

I can understand that the public key (like a padlock) can encrypt (lock)
something and only the private key can decrypt (open) it.

But I just can't understand the other way around.
How can the public key verify digital signatures encrypted by CA's private key?

A lot of material says that a public key can't be used for decryption
(that's fine, if imagine the public key is a padlock, then that's for sure, you're not able to unlock things). Then how can public keys be used to verify digital signatures, given that it can't be used to decrypt?

I can understand that public keys/private keys are used for client server verification.
A server encrypts some secrets and ask the client to decrypt it, and compares
the results, then I can know whether you're the holder of the private key.

The whole concept of trying to explain signatures with the terminology of encryption is flawed. It simply does not work. So let's unravel the whole thing, and this will require some formalism.

The system is said to be sound if the algorithms operate as advertised (Sign produces signatures that Verify accepts, using key pairs produced by KeyGen). The system is said to be cryptographically secure if it is computationally infeasible to make forgeries: given a public key Kp, and without knowing Ks_, it should not be feasible (within the limits of existing technology) to produce a (m, s) pair such that Verify(m, s, Kp) = true. The definition implies, in particular, that the private key should not be computable from the public key alone, because otherwise forgeries would be easy.

None of the above says anything about how the algorithms work. Various systems have been invented, described and standardized.

RSA is a very well-known asymmetric algorithm, but that's wrong, because RSA is not one algorithm. RSA is the name for an internal operation called a trapdoor permutation, from which an asymmetric encryption system and a signature system have been derived. The RSA operation is, roughly, the following:

Now that we have this trapdoor permutation, we can design a signature algorithm which works the following way:

RSA encryption is another, distinct system, that also builds on the RSA trapdoor permutation. Encryption is done by raising an integer x to the exponent e modulo n; decryption is done by reversing that operation thanks to the knowledge of the private key (the p and q factors). Since such a system processes only big integers, and we want to encrypt and decrypt bytes, then there must also be some sort of conversion at some point, so a padding procedure is involved. Crucially, the security requirements for the encryption padding are quite distinct from those for the signature padding. For instance, the encryption padding MUST include a substantial amount of randomness, while the signature padding MUST include a substantial amount of determinism. In practice, the two padding systems are quite different.

We described RSA; let's have a look at another, completely different algorithm called DSA. DSA does not use a trapdoor permutation. In DSA, we do computations modulo a big prime (traditionally called p) and modulo another, smaller prime (called q) which is such that p-1 is a multiple of q. p and q are known to everybody.

There is an operation-that-goes-one-way in DSA. Given an integer g modulo p (strictly speaking, in a specific subset of p called the subgroup of order q) and an integer x modulo q, everybody can compute gx mod p; however, recovering x from gx mod p is computationally infeasible.

While this somehow looks like RSA, there are crucial differences:

However, a signature algorithm can be built on that operation. It looks like this:

Now good luck with trying to describe that as some sort of "encryption". If you find that it is unclear what is being encrypted here, it is because nothing is encrypted here. This is not encryption.

However, there is an hand-waving conceptual description of signatures that works with both RSA, DSA, and many other signature algorithms. You can view signatures as a specific kind of authentication.

For signatures, we want something a bit more complex:

One rather generic structure for authentication schemes is based on challenges: the verifier sends to the prover a challenge, that the prover can answer to only thanks to his knowledge of his secret.

If you look at RSA, then you can see that it is a challenge-based authentication mechanism. The challenge is the hashed-and-padded message. The signer demonstrates his mastery of the private key by applying the RSA reverse operation on that challenge, something that only he can do; but everybody can apply the RSA forward operation to see that the challenge was indeed well met.

If you look at DSA, then you can again see a challenge-based authentication mechanism. The signer first commits to a secret value k by publishing r; then the challenge is (again) the message h combined with the commitment r; the signer can answer to that challenge only by using his private key x. In DSA, the signer has a permanent private key x, produces a one-shot private value k, and demonstrates his knowledge of x/k mod q. (This does not leak information on x because k is used only once.)

Summary: signature algorithms are not encryption algorithms, and explanations of signatures based on encryption can only be, at best, utterly confusing. A much better explanation is by showing that a signature algorithm is, in fact, a specific kind of authentication mechanism, by which the signer demonstrates his knowledge of the private key in response to a synthetic challenge that involves the signed message.

This authentication is convincing for bystanders as long as the said challenge is sufficiently well specified that it is provably not cooked in the advantage of the signer. In RSA, it is the result of a deterministic hashing and padding (and the padding takes care to avoid the values where the RSA reverse operation becomes easy). In DSA, the challenge is computed from a prior commitment of the signer.

Indeed, any zero-knowledge authentication system can be turned into a signature mechanism by making it non-interactive: since a ZK system works by commitments, challenges and responses to these challenges, you can make the signer compute all his commitments, hash them all along with the message to sign, and use the hash value as the challenges. This does not mean that a ZK proof lurks within all signature algorithms; however, if you find that DSA kinda looks like that, well, there are good reasons for that.

A digital signature is best understood by completely decoupling it from encryption. A signature algorithm generically consists of two operations, SIGN and VERIFY. SIGN takes a message and a private key and produces a blob of data known as a "signature;" VERIFY takes a message, a signature produced by SIGN, and a public key and outputs whether the signature is a valid signature for that message.

Here's an example of a signature mechanism not involving anything resembling encryption; it's known as the Digital Signature Algorithm:

As you can see, this doesn't exactly look like an encryption. Extracting t requires already knowing r (which it is supposed to be equal to). It works because the signer, knowing x, can create two numbers r and s with a certain relationship that can be verified by someone knowing g^x. There's nothing that you can get out of the signature except r, which is already in the signature; this algorithm (unlike textbook RSA or RSA with PKCS 1.5 signature padding) doesn't give you the hash of the message from the signature. Verification takes the hash as an input, but it then feeds it into a complex calculation to see if two other things are equal.

And that's all a verification is. Signing produces a bunch of data that is claimed to have some relationship to a particular message. The relationship doesn't need to be as simple as "apply this operation to the signature and you'll get the hash of the message;" it can be a fairly complicated thing like in DSA.

a) Message digest evaluation. The main purpose for evaluating a digest is to ensure that the message is kept unaltered; this is called message integrity.

i) The issuer’s private-key has encrypted the digest;

ii) The message is protected against any alteration.

Along with an entity’s or individual’s public key, digital certificates contain information about the algorithm used to create the signature, the person or entity identified, the digital signature of the CA that verified the subject data and issued the certificate, the purpose of the public key encryption, signature and certificate signing, as well as a date range during which the certificate can be considered valid.

Steps for Decrypting and verifying the signature of a message 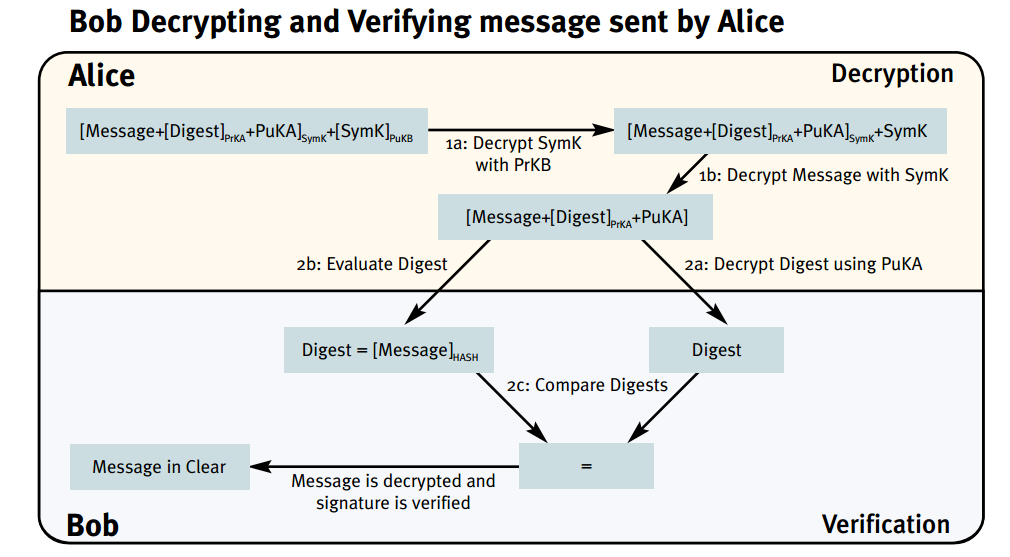 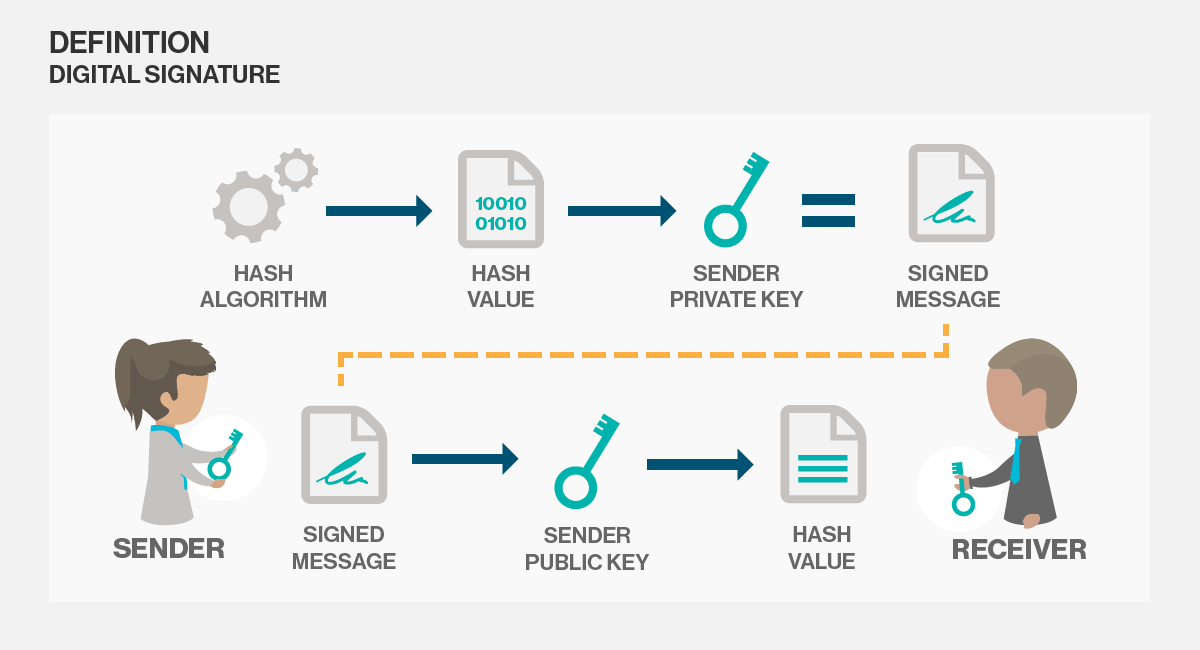 however, digital signature necessarily, does not only this type:

For RSA encryption, the public and private keys can both be used for encryption or decryption. The only difference between them is that you keep one key private while you advertise the other.

But both keys work for the cryptography operations. So for digital signature, the author encrypts their hash using their private key and you validate by decrypting with their public key.

This is not true for all asymmetric encryption algorithms.

Not the answer you're looking for? Browse other questions tagged tls public-key-infrastructure or ask your own question.

1
Digital Signature uses private key for encryption, and public key for decryption?
9
Difference between SSH-keys and password-based authentication
17
Trying to understand RSA and it's terminology?
9
What happens when I encrypt something with my RSA Public Key?
8
Is using "SHA-256 with RSA-2048 Encryption" a secure certificate hashing algorithm?
4
is the certificate signature a hash of just the public key?
8
Details of TLS certificate verification
13
How do certificates work in terms of encryption, hashing, and signing?
5
Can OpenSSL decrypt the encrypted signature in an Amazon Alexa request to a web service?
3
Asymmetric Encryption
See more linked questions

28
How do the processes for digital certificates, signatures and ssl work?
67
How does the digital signature verification process work?
4
multiple private keys for single public key
71
Why can't you work backwards with public key to decrypt a message?
6
Self-signed cert - how it works
2
How do clients extract the public key from a self-signed certificate?
1
Possible attacks using public key in a certificate