For the purpose of this question, let assume that an SSL/TLS connection has 4 parameters:

During the negotiation of SSL parameters, a browser tries to achieve the best possible parameters. So, my questions are:

I know that there can be probably couple of browser-dependent answers, but maybe there are some general rules enforced by SSL/TLS protocol.

@ThomasPornin's answer addresses your first question. Your second question, then, is "how does one configure the protocol and cipher suite in the browser?"

The list of cipher suites offered up by Firefox is controlled by the about:config variables security.ssl3.(cipher suite). You don't get to control the order with this interface, but I wouldn't worry about that; order on the client is a "preference" only, it is the server order that dominates the selection of cipher. The use of "ssl3" in the name doesn't mean it only impacts ssl3; it affects the cipher suites that can be offered by all SSL3 or TLS* versions. 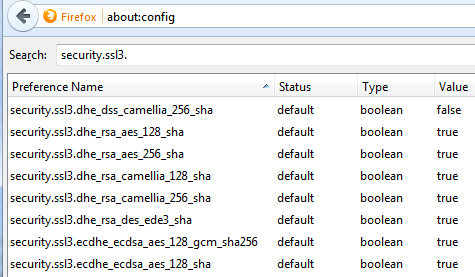 You cannot simply add a key with a cipher name; the cipher has to be supported by the software, and newer versions of Firefox support improved libraries of cipher suites as older, insecure suites are retired and newer suites are added.

I have read that it is possible to compile the library necessary to add a new custom cipher suite, but I cannot find that reference now and I wouldn't recommend it as a general rule.

The list of cipher suites can be reduced from the default using the --cipher-suite-blacklist command line switch, referencing the values from the IANA TLS Cipher Suite Registry.

There's an excellent discussion here which touches on how the different browsers make their cipher suites accessible, and more particularly how they don't go out of their way to make it easy or possible.

In SSL, the key exchange, symmetric encryption and MAC algorithm are all grouped together into a single aggregate notion called a cipher suite.

In the initial handshake, the client sends:

Then the server selects the protocol version and the cipher suite that will be used. The theory is that a courteous server will choose the protocol version that is the highest that both client and server support, and will honour the client's preferences by selecting the first cipher suite in the client list that the server also supports. Existing servers are not all courteous.

In any case, there is no independent selection of key exchange, symmetric encryption and MAC: the protocol is not orthogonal in that respect. Not all combinations make sense; and not all combinations that make sense are actually defined, i.e. have an allocated cipher suite identifier.

For more information on this process, you may start by reading this answer.

Browsers are more or less configurable with regards to the cipher suites they support and the order in which they send them. Usually you can activate or deactivate cipher suites (e.g. see this) but the order is under control of the browser's logic (which can change depending on the version). In any case, the server ultimately chooses, not the client (though of course the client can always force the use of a specific cipher suite by sending a list restricted to that single cipher suite).

Both the client (browser) and the server support a set of cipher suites.

The browser sends its list to the server, then the server picks from its (sorted) list something they both support.

The 4 parameters don't get chosen independently. All 4 belong to one cipher suite.

Which cipher suite your browser does support you can see here. Scroll down to "Cipher Suites (in order of preference)".

You can see the list for a given server here.

Not the answer you're looking for? Browse other questions tagged encryption tls web-browser cipher-selection or ask your own question.

6
How is the TLS version selected between client and server?
2
Do TLS and SSL connections have set encryption algorithms applied
1249
How does SSL/TLS work?
18
Remove RC4 from SSL/TLS ciphers in Chromium
22
Client-server encryption technique explanation (TLS_ECDHE_RSA_WITH_AES_128_GCM_SHA256, 128 bit keys)
6
In a browser web server communication, who decides which encryption protocol to use
1
What makes an SSL session pick one cipher over another?
1
Symmetric Crypto

72
symmetric encryption session keys in SSL/TLS
0
vsftp encryption algorithm
10
Should I tunnel multiple TCP connections through a TLS/SSL tunnel or use TLS/SSL for each connection?
21
How can I verify that SSLv3 protocol is disabled?
1
Is it more blessed to send than retrieve emails? Mandatory-TLS transmission vs IMAP over SSL retrieval
5
if SSL v3 disabled on www.google.com, why does openssl output suggest SSL v3 is being used?
1
Getting mixed results testing for TLS 1.0 support
2
How are key exchange and signature algorithms negotiated in TLS 1.3