This is a question derived from several others, and I can not comment on those, so it is not duplicated, please read:

Besides that, there is an issue with:

Chrome and Firefox are certainly vulnerable to this on unpatched systems (which is likely a lot of systems today)." 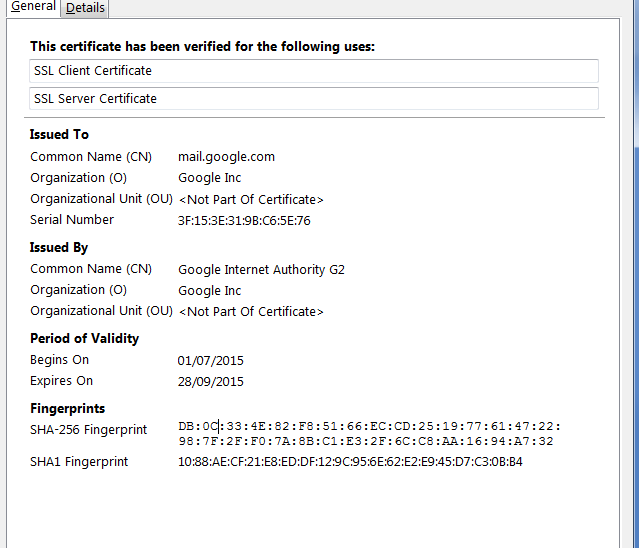 From point 1), if you live in those countries, with "spain...etc", if there anyway to check that the CA you are using (in firefox for example or other) is the proper company , for example google/gmail? and not the government one?

You can check the certification path to find out which intermediary and root CAs signed the certificate that you are presented with from your browser.

From point 2) how do you we know that we have our browser/system not patched for that kind of bug?

Generally only by checking online vulnerability databases such as this one or vendor bug lists to check whether a particular security issue has been identified and patched.

You can check online SSL fingerprints such as this one on GRC. The page notes that Google and Apple cannot be checked in this way:

This means that a simple comparison of certificate fingerprints could erroneously lead people wishing to test these huge websites to conclude that their connections were being intercepted, when they have simply received a different valid certificate than the one received and shown by this web page.

The best solution is to test smaller sites that are known to be using single certificates, or sites using the completely unspoofable extended validation (EV) certificates with an EV-honoring web browser such as Firefox or Chrome (but not Internet Explorer, which doesn't properly verify EV certificates).

Note that if you were the subject of a targeted attack, a Man In The Middle could alter the GRC page to show you the certificate fingerprints that she was spoofing. Unlikely, but important to include this information here because it is easily technically possible. You could check the GRC page via TOR or via another connection (e.g. via 3/4G) in order to verify your main connection has not been MITM'd. This can also be applied in order to verify the certificate chain in most cases - but as noted, Google and Apple may have different CAs depending on which server your connection hits.

Not the answer you're looking for? Browse other questions tagged certificates web-browser privacy certificate-authority gmail or ask your own question.

25
Getting a Root CA accepted in systems and browsers
2
Does Internet Explorer handle Extended Validation properly
5
Are there other roots of trust on my computer aside from these 46 root certificates?
2
Firefox security certificate issues: FUD or truth?
1
Error in SSL handshake with a web service - chain violates basic constraints limit
1
Differences in certificate verification between ssl libraries
4
Smooth root certificate rotation