Is it worth augmenting /dev/random entropy in software?

So my question is: lacking a legitimate (hardware) source of entropy, is it reasonable to routinely augment /dev/random using something like rng-tools (fed from /dev/urandom) or haveged?

It is more dangerous to have programs depending and/or waiting on /dev/random's shallow entropy pool, or to have (arguably) less robust randomness introduced purely by software?

And when I say "routinely", I mean "all my servers, starting when booted, running all the time, just to be safe."

I'm not questioning whether /dev/urandom is sufficiently strong - as per the cites above, almost everybody agrees it's fine (well, not everybody, but still). I want to be certain that using a daemon like rngd or haveged to work randomness back into /dev/random - even if they're based on /dev/urandom like rngd would be in most cases - doesn't introduce weaknesses. (I'm not comfortable with just mknod'ing the problem away, for maintenance and transparency reasons.)

(While this question could be considered a dupe of Is it safe to use rng-tools on a virtual machine?, that answer seems to fly against the widespread reputable voices saying /dev/urandom is sufficient, so this is in a sense seeking clarification as to where vulnerability would be introduced (if agreeing with that answer) or whether it is in fact introduced (if not).)

To make things simple, let's define a working model of the functioning of /dev/random and /dev/urandom:

(The above is a conceptual model which is close enough to the actual implementation for the purposes of the current discussion.)

The security of the whole thing depends on the entropy of p; roughly speaking, on how much p is unknown to attackers. Attackers know that p has size k, so they may try to guess p by brute force, which has a cost of about 28k-1 on average. The CSPRNG is deemed cryptographically secure because analysis of many bytes of the output does not yield information on other output bytes -- in particular, it does not yield information on p (either before or after the run).

We now suppose that x is chosen by the attacker. As long as H behaves like a secure hash function, H(p,x) has the same entropy as p -- the attacker still has no information on p after the operation. Strictly speaking, there can be a "space reduction" effect, down to about size 28k/2 if the attacker is allowed to do the "entropy feeding" trick 28k/2 times. If k is large enough (say 32, for a 256-bit internal state), the remaining space size is still large enough for security, and this situation cannot be attained anyway.

Since the CSPRNG does not yield information on p, the output of that CSPRNG cannot be worse for security than an attacker-controlled x. This is the part which would be most tricky to formalize in an academic way (this would take a few pages to write it down properly). Intuitively, the CSPRNG, when using k bytes of input and taking k bytes of output, behaves like a random oracle.

This of course relies on the idea that the state-update function (for entropy injection) and the CSPRNG are both "ideal" functions. If they are not, then you are doomed anyway (the autoblocking behaviour of /dev/random would not save you in that case).

Unfortunately some of the people who prefer /dev/random are FIPS and Common Criteria. [EDIT: I can't find a citation for it, but see at the bottom for an unofficial source] So if you want your software to be FIPS / CC certified, it can not use /dev/urandom. It must prove that it keeps an accurate estimate of its entropy, and it must block when the entropy runs low.

All Deterministic Random Number Generators are only as random as their seed. Entropy is an estimate of how random (or unexpected, or unpredictable) your seed is. In order to increase the entropy of your RNG, you need to mix in fresh randomness from an outside source. If you have access to unpredictable sources of data (often timing on human input devices, or thermal noise), then by all means, feed it into /dev/random to increase the entropy of its seed.

The Linux kernel will automatically mix in as many sources of randomness as it has access to, timing of packets, timing of keystrokes, randomness from the process scheduler, attached hardware random number generators (which are starting to be included on consumer motherboards). So that's great.

The only case I'm aware of where /dev/random is known to be weak is on headless VMs where there is literally nothing to pull on for unpredictableness.

Alright, let's get to the actual question:

I want to be certain that using a daemon like rngd or haveged to work randomness back into /dev/random - even if they're based on /dev/urandom like rngd would be in most cases - doesn't introduce weaknesses.

My question is: where are rngd, haveged, and /dev/urandom getting their randomness from? Is it really new randomness coming from outside the machine, or is in just a re-hash of /dev/random?

I can't speak to rngd or haveged, but I know that on Linux /dev/urandom shares an RNG with /dev/random (see this awesome rant, from which I've borrowed an image below), and on FreeBSD /dev/urandom is literally a pointer back to /dev/random, so in all likelihood you're just feeding /dev/random back to itself.

I'm not an expert enough to know if this introduces weaknesses or not, but it certainly isn't doing any good. 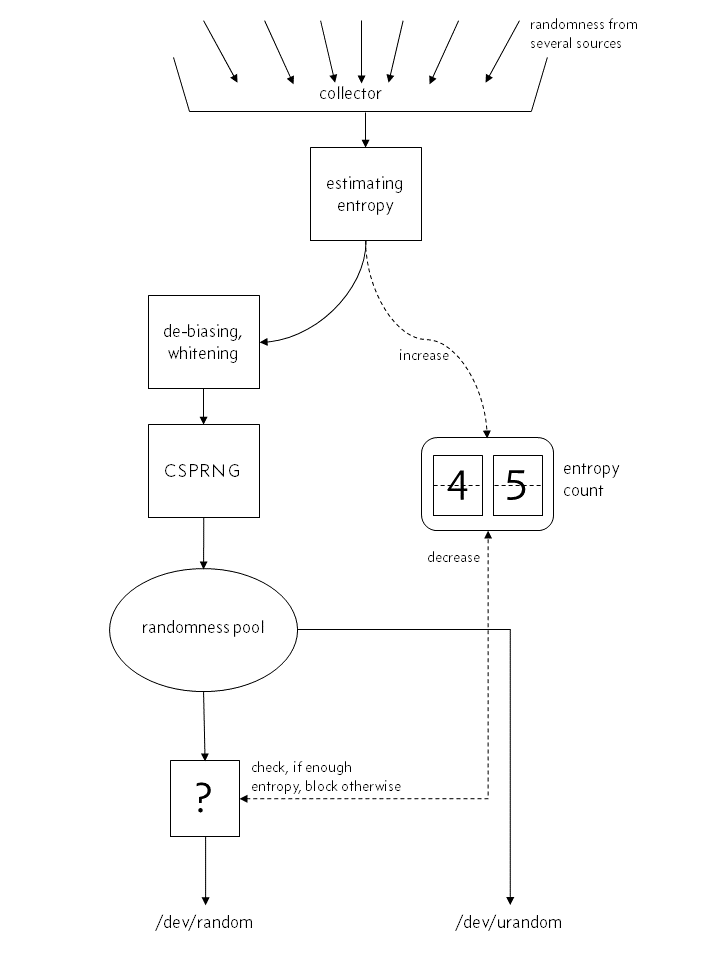 The only mention of "no /dev/urandom" that I can find in FIPS docs was a draft from 2014 that was never released to the public. It included the footnote:

Note2: The /dev/urandom generator is assumed to provide no entropy unless it is specifically instrumented to ensure a minimum of 112-bits of available entropy at all times.

It then proceeds to list ways in which you can guarantee that entropy. This is a lot less rigid than I had been lead to believe. Cool, Today I learned!

Don't do fishy things with feeding hogwash data into /dev/random etc. If you want, you can replace /dev/random with a symlink to /dev/urandom

You can use haveged or something like that, but don't use anything without any external input. (also, especially with havaged take caution if you run virtualised hardware)

/dev/random is quite robust against input with bad entropy, but if you feed it too much nonsense, who knows what happens?

/dev/urandom is well known and tested. If you link /dev/random to it, you probably won't have problems. If you do fishy things, you might have problems!

Also: What would you want to be responsible for: "The first secure connection to our server after reboot takes almost a second!!!"/"Generating a lot of certificates is slow" or "The thing you did with our random stuff is totally broken! All our keys are broken, all our data is stolen! WHAT HAVE YOU DONE?"

Not the answer you're looking for? Browse other questions tagged random or ask your own question.

204
Is a rand from /dev/urandom secure for a login key?
53
Feeding /dev/random entropy pool?
30
What do I need to configure, to make sure my software uses /dev/urandom?
20
Is it safe to use rng-tools on a virtual machine?
6
Pseudo Random Generator is not initialized from the (entropy pool)?
6
How bad it is to feed /dev/random with /dev/urandom?
2
Which software RNG for linux?
3
Why isn't rng-tools installed by default on all OS?
0
A simple question about entropy and random data