Is gmail-to-gmail still insecure? Why?

I have always heard that email is an insecure method of communication; I assume this has something to do with the email protocol itself.

But when sending an email from one Gmail account to another, Google has complete control over how the email is transmitted, and Google seems decently concerned about information security. So it seems that they could, if they wanted, turn Gmail-to-Gmail messages into a secure communication channel and that this would probably be in their best interest.

So have they done this? If not, why not? Is Gmail-to-Gmail communication still insecure (for the purpose of, say, sending a credit card or social security number to a trusted recipient)?

For these reasons, the security and privacy community long ago reached the stance that only end-to-end email encryption is secure. That means the email remains encrypted on server disks and is decrypted when you're reading it, and never stored decrypted.

There have been an enormous number of comments, so let me expand/clarify a few things.

End-to-end encryption - in the context of email, when I say end-to-end encryption I mean something like PGP, where the message is encrypted until it reaches the recipient's email client, and only decrypted to be read. Yes, this means it can't be searched on the server, and often also means it doesn't remain "backed up" on the server either. This is a case where security and functionality are at odds; pick one.

Security and privacy community - unlike many Information Security topics, email security is one that extends out to other communities. The question of what stateful inspection in a firewall means is not something often extended out to interest others, for example. But email security is of direct, significant interest to

Forget about credit card data, there are people trying to communicate with email whose lives, and the lives of their families, depend upon the security of the email. So as there are phrases in the comments below like "depends upon what your standards are for 'secure'", "sufficiently motivated adversary", "there is an illusion of security at the email-level" - am I being too strong to say the server can't be trusted? Not for people whose lives are at stake. That's why the phrase "email is insecure" has been the mantra of the privacy movement for 20 years.

Trusting the server - In the US, "your cap for liability for unauthorized charges on a credit card is $50" so you may well be happy trusting the server with your credit card. If you're cheating, on the other hand, you might lose a lot more as the result of leaving unencrypted email on the server. And will your service provider shut their doors to protect your privacy? Probably not.

STARTTLS - STARTTLS is SSL for email; it uses the same SSL/TLS cryptographic protocol to encrypt email in transit. However, it is decidedly less secure than HTTPS for several reasons:

A lot of this hinges on what you mean by "insecure".

Traditionally e-mail was considered an insecure transport as it was transferred over an unencrypted protocol (SMTP) and typically you had limited control over how the e-mail actually reached it's destination, so you wouldn't necessarily know about the security of the systems that it traversed.

These days most modern large e-mail providers use encrypted transfer protocols (generally SMTP + SSL) which removes the concern about the e-mail being sent over the Internet in the clear, however for generally Internet e-mail the concern about not knowing what systems will process the mail on the way to it's destination remains.

In your case you would seem to know that as it'll be google sending and receiving, so it's not likely to leave their control.

A couple of potential concerns remain.

If you're satisfied in both those regards then generally yep I'd say there's nothing wrong with using e-mail for general data transfer. The one other point I'd mention is that specifically for things like Credit card data, if you're a business you'll have compliance concerns (e.g. PCI) and they may well preclude the use of e-mail.

In the Snowden revelations it showed that the NSA had tapped into the fibre cables connecting Google's datacenters together. You can refer to the image below and make your own deductions about whether anything on Google's network is actually secure. 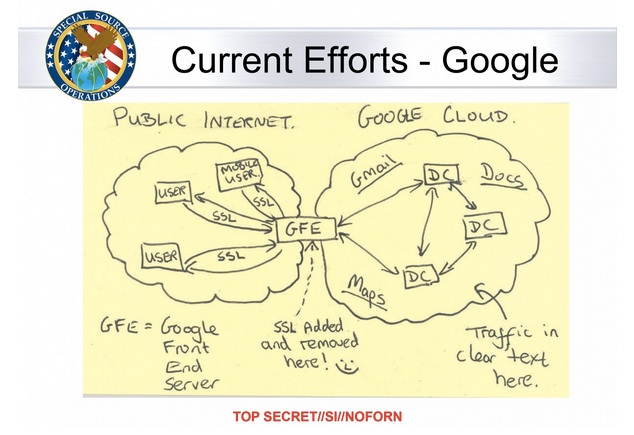 They may have improved the situation since then, but it would be hard to prove to customers exactly what they've done to improve security on their network and that the government no longer have full access. You would have to take their word for it. If you want real security you should use open source end-to-end encryption where only the sender and receiver have the private keys and all encryption/decryption is done client side. There are a number of new webmail services around for this or you can always use the classic GnuPG.

In addition to the other excellent answers, there is one more concern: just because the sender and the final destination are both on gmail does not mean that the email remains within Google.

All the other answers are concerned with someone reading your e-mail. However, that isn't the only concern - you also care about the identity of the sender. And that's another great weakness of e-mail - by default, there is no way to verify the identity. The sender is the one who supplies the "From" address, and I can easily send e-mails "from" bill.gates@microsoft.com. You have no way of knowing if I'm really Bill Gates.

Fortunately, many e-mail providers have already implemented some measures to alleviate this. For example, many will flag the e-mail as spam if the domain involved doesn't have the SMTP server you used for sending the e-mail in its MX records. Faking an internet IP address is much harder than faking the From header, and the same applies to faking the DNS records. Some will not allow you to send an e-mail with From being an address that doesn't belong to you (usually, it's either outright forbidden, or you need some sort of confirmation on the e-mail address) - this includes GMail, so GMail<->GMail e-mails ensure the correct identity. Of course, you need to pay attention - for example, I could still use Bill Gates as the From "name", while keeping the address malicioushacker@gmail.com, or I could try getting a domain that doesn't look too suspicious on first glance (e.g. bill.gates@micorsoft.com). Unicode domain names are probably going to be a lot of fun in this regard :)

Many e-mail clients will also allow you to both sign and encrypt the e-mail, which ensures both the identity and the safety of contents. Of course, you need to know you can trust that given certificate in advance, and you need the proper key to decrypt the e-mail. It's especially useful for e.g. companies, which can have root certificates that are trusted, so any child certificates are implicitly trusted as well. However, even if you only have the e-mail to go on, it's rather easy to ensure the safe exchange of keys - it just requires a few e-mails back and forth (though there's still ways to break this with MITM).

"So it seems that they (Google) could, if they wanted, turn gmail-to-gmail messages into a secure communication channel, and that this would probably be in their best interest."

No doubt Google "could" turn Gmail into one of the most secure email services around. They clearly have the resources. But to answer the OP's question -- No, this would NOT be in their best interest!!!!! Remember, their business model is to provide all sorts of internet services free of charge to the end user. They make their money by collecting the end user's data (email content, GPS location, search queries, etc.) to develop a profile that they can sell to advertisers. This means your business is literally Google's business. Google will ALWAYS be looking through your stuff, they will always store your stuff, and they will always be giving it to 3rd parties. They have to. Its how they pay the bills. Moreover, since Google maintains the key to any encrypted information they can and will turn it over if subpoenaed by the government or even private parties. This is not the case for services that "throw away" the encryption key. If you require security look for companies that don't profit from your personal information.

If you feel the need to distribute your financial information electronically then why not use services that are designed for security (e.g. proton mail) Wickr, or even iMessage (they throw away the encryption key). Also, break up the numbers into separate messages so an unintended reader can not easily recognize it is as a CC number.

If you have a specific interest in credit cards, you will note this article highlighting Google's long history of at least inadvertently distributing credit card numbers: http://www.toptal.com/web/with-a-filter-bypass-credit-card-numbers-are-still-still-google-able

Not the answer you're looking for? Browse other questions tagged email gmail or ask your own question.

4
Is it secure to send sensitive data through gmail smtp with nodemailer?
3
End-to-End (Point-to-Point?) Email encryption
3
Encrypt data stored in a database
1
Sent Rental Application Via Email with No Response... Is My Information in Jeopardy?
-2
How can I mitigate scam comments on my YouTube videos?
-2
Email not considered a secure form of communicate for legal / government purposes - why?

13
Paypal Account created using my gmail account
22
Good, simple list of reasons that email is inherently insecure
6
Is e-mailing personal information significantly riskier than transmitting the same information another way?
3
Prove ownership of a GMail account
5
Should I email contents of a https form submission
1
'Critical security alert for your linked Google Account ' but I don't recognize the account
0
How to find the source of business email account compromise
45
Why do email server/clients block executable attachments?