Ask Question
Asked 4 years, 7 months ago
Active 4 years, 4 months ago
Viewed 129 times
1
Closed. This question is off-topic. It is not currently accepting answers.

OpenBSD offers a live cd that can be downloaded at http://livecd-openbsd.sourceforge.net/

However, there is no md5sum, no sha256, no checksum of any kind on this page. How can we test this version for integrity?

OpenBSD does not require a "live" cd and if you want to err on the paranoid side you should consider creating your own "live" medium by following their own FAQs:

It is very easy to create a bootable USB flash (or other!) drive that can be used as a "live" OpenBSD system without installing OpenBSD on the local hard disk of a machine. Obviously, the target machine must be bootable from a USB device, but the initial load can actually be done from any machine with a USB interface.

Benefits: if you have an OpenBSD installed you can verify the authenticity of the bsd.rd file by checking it against the public keys embedded in each distribution (see this paper but also google for openbsd signify):

After each release of OpenBSD, we generate a new key pair for the release after next. That's plus two. For example, after 5.6 was released, keys for 5.8 were generated. This way, the 5.8 keys are then included in the 5.7 release. So, if you upgrade every release, you will have an unbroken chain of keys back to your initial installation.

If you don't have an OpenBSD installed and you only want to check hardware compatibility, download (and verify!) the bsd.rd file, dd it on a portable medium, then boot it and give it a go. 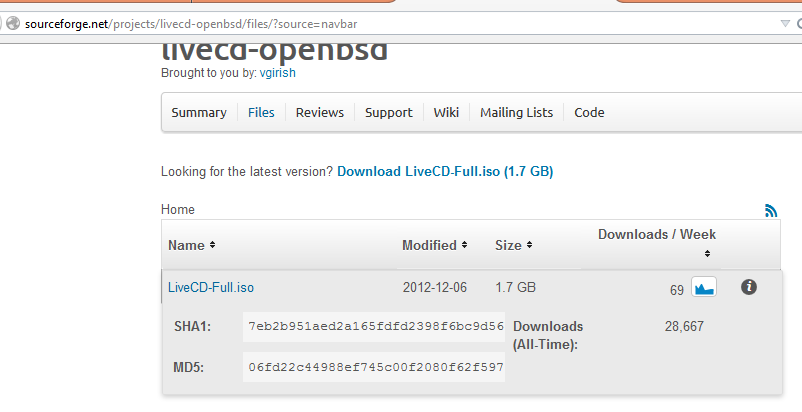 I followed the links to download the 2 versions of what you are loooking for on SourceForge, then I canceled the download and deleted the URL until it looked like this:

Once there, you will see this:

Click on the i icon of the file that interests you and you will find what you look for:

5
OpenBSD-based LiveCD/LiveDVD - is it secure? is it offical?
5
Increase security without using “dynamic” kernel modules?
2
Is running an OpenBSD in QEMU on an OpenBSD machine safe?
2
How to detect suspicious activity on a web and mailserver?
1
How to detect/mitigate UDP port scan using OpenBSD and pf
8
Is receiving IPv4 connections on AF_INET6 sockets insecure?
2
Does OpenBSD's security protect against identical vulns in other OSs?
5
Is there any safe OpenBSD desktop screenlocker?
1
Why does paxtest show OpenBSD as vulnerable?