I'm annoyed and actually scared by all the permissions that I have to grant the applications that is running on my Android phone. Is there is a way to bypass them ?

Let's say my microphone. My Facebook application wants to access it without my knowledge once I grant the permission. Is it possible to make new virtual devices, like a microphone which feeds random noise and switch back when I really need them ?

Is there a custom rom for android which already does something similar ?

There's also the Xposed-Framework module XPrivacy which allows very advanced permission management. AFAIK this soultion gives the most possible control over the permissions of an app. However you need some deeper knowledge to fully understand all the possibilities. It follows the idea of providing mock(fake) data instead of just denying the access to it. There's also an paid version of the module which allows such things as whitelisted access to data. For example you can allow the Facebook app to just access the contacts John and Bob.

For Android <= 4.4.4 this solution is perfectly stable. For newer versions of Android there's some trouble with the Xposed-Framework at the moment, especially with Samsung ROMs.

To my knowledge, CyanogenMod allows you to modify each app's permissions at any time after install. When an app requests a service that you've blocked in this way, the call will fail and throw a java.lang.SecurityException. 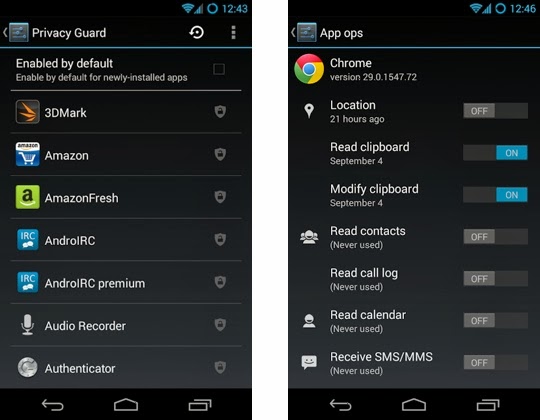 Android Marshmallow will partially bring this feature to stock Android, ie some permissions will be modifiable after install, but stock Android will never fully support this for all permission types because allowing you to block an app's internet access, in-app-purchases, etc interferes with Google's ad revenue.

As a final note, I stopped using the Facebook app when they added the mic permission. Too Creepy. When I was playing with the Android M dev preview a few months ago, I tried removing the Camera permission from a bunch of apps. Most apps popped up an error message like I expected when I tried to access the camera. Facebook, on the other hand, went ahead and opened the camera as if nothing was wrong, so I'm highly skeptical that Facebook doesn't play by the rules.

EDIT: Apparently the Facebook app does this in CyanogenMod too, confirmed by @Thanathan in this question.

CyanogenMod already has this feature. You can set every permission for every app on Allow, Ask everytime or ignore the request.

There are also apps like "Permission Manager - App ops" or "F-Secure App Permissions" which are able to show and disable the permissions for your apps.

Not the answer you're looking for? Browse other questions tagged android or ask your own question.

30
Android security without updates
13
Why are Android permissions granted in groups?
1
Prompt for PIN when installing Android Apps?
8
Does the use of a smartphone's Secure Element really offer security benefits to a banking app?
6
Is it safe to connect a random USB battery from a bin to my phone without stopping data transfer in some way?
5
How safe is it to use Fingerprint-based authentication on unencrypted Android devices?
1
How to proactively prevent data-theft if a stolen android phone is immediately taken offline?