What are potential security risks when using an insecure wireless connection?

If someone is using an insecure wireless connection (for example a hot spot in a coffee shop) does it pose a threat even if the person is using a secure application layer protocol? What I mean by secure application layer protocol is HTTPS, sftp, ssh etc. In this article, it is claimed that credit card numbers can be compromised, but would this be the case even if using HTTPS?

If I connect to a non-password protected wireless signal and use the Facebook app on my mobile phone, is it easy to get my Facebook password?

An attacker sharing the wireless network can definitely pose a threat even when you are apparently communicating securely.

There is a great commercial wireless penetration test tool titled Silica that can do much of what you alluded to (i.e. Passively hijack web application sessions for email, social networking and Intranet sites.). 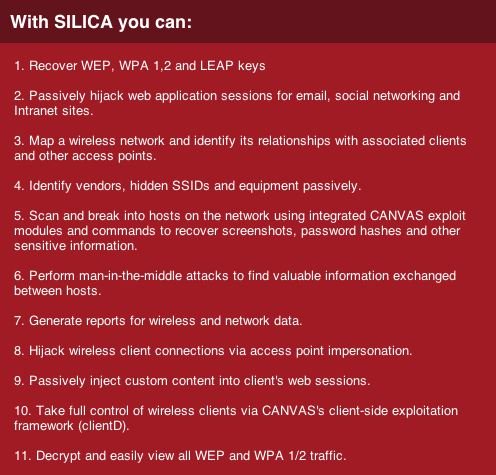 Regarding Facebook or other mobile phone applications, it depends on the applications being properly configured to communicate securely over the network.

Facebook always posts to a secure page when users are logging in and employs industry standard encryption. This may not always be apparent from the URL (web address), but rest assured our logins are secure.

But that doesn't mean your active sessions are safe - you could also become a victim by accepting a rogue SSL certificate by any number of clever means, again, allowing an attacker full visibility.

Michal Zalewski has a great blog entry titled Unencrypted public wifi should die that reveals a number of additional risks.

The best advice is still to use a VPN connection anytime you are using public wifi.

but if I rely on HTTPS (assuming a valid certificate) for all sensitive browsing, (banking, social media, e-mail, etc.) then is there still an issue?

Yes and no. It has been demonstrated that HTTPS can be circumvented, giving the user almost no clue that this happened. You can read more about this here: SSLSTRIP

On the same site you can read about a vulnerability that IE had which made HTTPS not secure (IE Basic Constraints vulnerability. Even if this vulnerability has ever since been patched, this shows that even if HTTPS is secure in itselft, one of its implementations can be broken and therefore make you vulnerable to an attack.

Finally, this article explains five ways in which you could break HTTPS.

This doesn't mean of course that HTTPS is not secure or that it's useless, far from it, but you shouldn't feel 100% safe when you are using it.

Also, I know that it is as well trivial to obtain a user's MAC address, but I am not aware of any dangers associated with this. If I understand correctly, a MAC address is no different from a physical address, and poses no harm in the wrong hands.

It can indeed be a problem. There is one type of attack, called ARP spoofing, which allows an attacker to impersonate another computer on the LAN, thereby receiving all the packets originally addressed to the legitimate user.

This is a little different from the scenario you are picturing (obtaining another user's MAC address), because here the attacker tries to associate its own MAC address to the IP address of the victim, but it's just to show you that MAC addresses can be used to attack.

Open ports are dangerous, is this why? In my specific case, I use things like MAMP, could this be a vulnerability if I were to use it while connected?

The answer in the link you posted is very good. Yes, you are more vulnerable than you would be without leaving that port open, because it's simply another way through which a malicious user could attack you.

But more and more I am starting to think that with the proper counter-measures, using an open network can be no different to using a WPA/WPA2 encrypted network.

It is different, because if you encrypt your network, an attacker would first need to enter your network. If the network is properly encrypted, this could mean a huge work for the attacker, who could then simply decide that it's not worth it :)

Assuming that I don't care about others mooching off of my internet, what are the downfalls?

As Lucas pointed out, you are responsible for your network. Suppose that some kind of illegal activities take place on your private home network, you are the one who will be held responsible (it already happened). It would be difficult, at this point, to prove that you were not involved.

Make sure you block everything that's not necessary. You don't want Torrents. Implement a form of bandwidth shaping so no single user can monopolize the network.

Stil, there are other concerns to be mindful of on public Wi-Fi networks - encrypted or not. The best advice is to avoid these networks where possible. Use a VPN for your Internet access, if you must connect via public Wi-Fi.

If I connect to a non-password protected wireless signal and use the Facebook app on my mobile phone is it easy to get my Facebook password?

In short, the answer is it depends.

First, are you sure your phone's Facebook app uses HTTPS? If it doesn't, then your credentials and data are being sent in the clear.

Second, does the Facebook app use HTTPS only for login or does it handle all transactions through HTTPS? If the former, your session cookie is probably being sent in the clear - nearly equivalent to your login credentials.

Third, does the Facebook app support and use strong ciphers for its SSL/TLS connections? If not, the data may be as weakly protected (or worse) as if it was in the clear on a WEP network.

Fourth, does the Facebook app perform validation of Facebook's certificate before establishing a connection and will it give an error or refuse the connection if the certificate is invalid? If not, you could fall victim to a man-in-the-middle attack via an SSL proxy.

There are probably more weaknesses to consider that could still expose your Facebook credentials on an open wireless network, but the checklist above should help you avoid most attacks.

However, it should be noted that you are still putting your computer (or phone, tablet, etc.) in a more vulnerable state when connecting to any public network. At home, your first line of defense from untrusted systems is your router. Most routers have built-in firewalls, and their NAT functions also make attacks targeted at your system much more difficult. Once you've connected to a public network though, your system is locally reachable by every other system connected to that network - and, since the owners of these systems are total strangers, those systems are by nature untrusted.

That risk is essentially the same whether the public network is encrypted or not. Lack of encryption and/or authentication on the wireless network just means that the barrier for entry to it is effectively nil. I discuss this issue a little bit more in my answer regarding password-protected free Wi-Fi networks.

It is still worth stating that just because you're on a local network of untrusted systems, it doesn't mean that those systems have unfettered access to yours. Your system's local firewall and other protections still have to be compromised for that to happen. However, it does mean that users of those untrusted systems can break into yours much easier than a random hacker on the Internet.

All of these concerns can be greatly mitigated with a VPN that tunnels all network activity to your trusted provider, and does not allow your system to accept connections from others on the local network.

If someone is using an insecure wireless connection (for example a hot spot in a coffee shop) does it posse a threat even if the person is using a secure application layer protocol?

It should not - this is by definition of a "secure application layer protocol".

If a so called "secure application layer protocol" cannot be used over an insecure link, it just means it is not a secure protocol.

No e-banking should be designed that way, of course: e-banking, and e-commerce should be only done over HTTPS.

If the web-application sometimes uses HTTPS and sometimes reverts back to HTTP, the privacy and integrity of exchanges could be compromised.

If your browser implementation of TLS has flaws, it could be attacked.

If you accept unverified TLS certificates, the TLS session integrity can be compromised.

Regarding the referenced article

In fact, many internet service providers include a clause in your contract that holds you responsible for any illegal activities that occur on your connection.

The clause in the contract with your ISP ("you are responsible...") just says that the ISP will consider that any action against the ToS (Term of Service) using your connexion allows them to terminate the contract (they cannot prove it is you who initiated this particular action, and they do not care).

Also, once an intruder has access to your home network, they have access to everything you have stored on any computers on that network and anything you do online.

An intruder, once inside can access your tax documents, financial records, online banking information, credit card numbers, emails, usernames and passwords, and even where you are going online.

(At this point, I just stop reading.)

Just disregard such tabloid stuff, as I do.

Not the answer you're looking for? Browse other questions tagged web-application tls web-browser wifi ssh or ask your own question.

9
The Dangers of Open Wi-Fi
-1
Is it possible for a school to see what you're doing when connected to their WiFi?
2
Possible to safely send money via Paypal on public wifi networks?
0
Is the typical hotel wifi authentication insecure?
113
Does an established HTTPS connection mean a line is really secure?
39
Security impact of using a public password for free WiFi
19
How to use public WiFi safely?
6
How secure is SSL?
2
How much data can an app gather from my Android device?
2
What is more safe: 3g/4g or public wifi?
See more linked questions

6
Securing a multi-tenant architecture
24
Specific risks of embedding an HTTPS iframe in an HTTP page
1
Securely transferring data from service provider to client
33
Ensure web service only accessed by authorized applications
1
What are potential risks of using PGP for website login?
3
Which is the most recommended way to expose a file to a computer in an external network in a secure way?
78
How is no password more secure than username+password?
0
Security of wireless connection vs. wired connection on wireless router
8
What does using Cloudflares WARP app offer that HTTPS (websites) alongside DNS over HTTPS / TLS doesn't?